THE STORY OF JOSEPH MCMICKING

Sotogrande was established by Joseph Rafael McMicking y Ynchausti, an heir to the Philippine multi-national conglomerate, Ynchausti y Compañia, along with his wife Mercedes Zobel de Ayala y Roxas, of the prominent Zobel de Ayala family. McMiking served as a member of General MacArthur’s staff throughout World War II, attaining the rank of Colonel in the United States Army. After the war, he became asuccessful self-made millionaire, establishing one of the first venture capital companies in California and became known for his philanthropic spirit.

In 1962, McMicking asked his cousin Freddy Melian who worked for the Ayala Corporation, the developer of the exclusive Forbes Park housing development in Manila; to take what he had learnt to seek out a suitable area close to the ocean to develop a similarly exclusive resort. Melian explored Spain’s Mediterranean coastline on a motorcycle in search of the perfect spot which was to have unspoilt beaches and good airport access. Returning with news of his discovery, McMiking with his two nephews Jaime and Enrique Zobel, chose the property called Finca Paniagua in San Roque, close to Gibraltar to begin realising their plans. Enrique also went on to drive the development of polo and many sports in Sotogrande.

The McMikings created Sotogrande, where they moved and spent most of their time with the vision of developing a community based on friendship. He once said of Sotogrande: “To have a Sotogrande based on money would be the most horrible society I can imagine. It was first suggested that only landowners could join the Club de Golf. I said, ‘That’s crazy.’ A club is a thing people join because they are friends, or potential friends.”

Thanks to its mix of Mediterranean sun, its rich architectural offering and the sense of privacy that its landscaping and design affords, Sotogrande has long been popular with high-profile powerbrokers seeking refuge from the world. All have been attracted by Sotogrande’s ‘low key’ lifestyle, which in the Sixties, appealed to some of the most influential public figures of the time (as opposed to see-and-be-seen celebrities who sought the gaze of cameras in the likes of St Tropez). Famous residents in this early period included the president of the First National City Bank in New York, George Moore. An influential and popular character, he brought his powerful friends with him, including Jackie and Aristotle Onassis, opera singer Maria Callas and the politician, Spiro Agnew.

CAPTURING THE ELITE ON FILM

The American society photographer Slim Aarons was famous for his pictures of the rich and famous at play. He once remarked that famous people invited him to their parties “because they knew I wouldn’t hurt them. I was one of them.” His ‘Poolside Gossip’ series, taken in Palm Springs, have become familiar iconic images of the era. As a playground where nobility and celebrity rubbed shoulders, Sotogrande offered rich pickings to Aarons. His ‘poolside’ shots of 1975 capture a unique slither of Sotogrande society, with sun-tanned bodies lazing by crystal-blue pools surrounded by clipped jade green lawns.

Sailing had always been popular with residents of Sotogrande — ever since it first the 1960s when sailors raced catamarans from Cucurucho beach. But it was in the 1980s that sailing really took off and Sotogrande’s fledging yacht club hosted the Campeonata de Espana (Spanish Championship). Throughout the 80s sailing grew in popularity, with the catamarans giving way to dinghies in the nearby Puerto Sotogrande. The storied history evolved into a sailing destination with iconic status with the establishment of the Real Club de Maritimo de Sotogrande (Sotogrands Yacht Club), endorsed by King Juan Carlos 1. Today the RCMS has over 500 members and hosts many major international sailing events including.

THE RYDER CUP TURNS SOTOGRANDE INTO A GOLFING LEGEND

In 1984, Spanish industrialist Jaime Ortiz-Patiño acquired the Robert Trentam Jones designed, Real Club de Valderrama, and contributed to its re-design and expansion. Patiño subsequently arranged for Valderrama to host the 32nd Ryder Cup in 1997, its first ever staging in continental Europe. It also marked the first time that Tiger Woods had ever competed in the tournament. The European team was led by Spanish national hero Seve Ballesteros, and won by a margin of 14½ to 13½ , retaining the Ryder Cup. Real Club Valderrama has since been a Mecca for golfers keen to walk in the footsteps of such a momentous moment in the sport’s European story.

POLO GOES FROM STRENGTH TO STRENGTH

Since the first polo field was built here in 1965, the sport has been indivisible with Sotogrande. In the new decade, polo’s popularity is gaining even greater currency. Sotogrande’s Santa Maria Polo Club is now widely recognised as one of the foremost clubs in the world — and has become a regular stop in the sport’s grand slam. The club holds over 25 tournaments throughout the year, welcoming more than 220 teams, 800 players, and around 2,500 horses every summer season.

LA RESERVA SOTOGRANDE, WHERE THE CYCLE OF FRIENDSHIPS STARTS AGAIN

Nestled between the Mediterranean Sea and the densely wooded Andalucían Hills, lies La Reserva Sotogrande. This is the next chapter in Sotogrande’s remarkable story — a private enclave inside a private world where glamour has resided on the Costa del Sol since the early 1960s. La Reserva is the vision for Sotogrande’s dynamic future — one that balances modern architecture with a contemporary, healthy lifestyle where families and friends can thrive with a better work-life balance in the balmy sunshine of southern Spain.

Due to additional government restrictions the availability of some of our facilities have had to be reviewed. The golf course and tennis and padel courts will continue to be operational following strict sanitary measures. In addition, we have been forced to postpone this months workshops due to take place this weekend. We hope to celebrate them soon and will inform you when they have been rearranged! 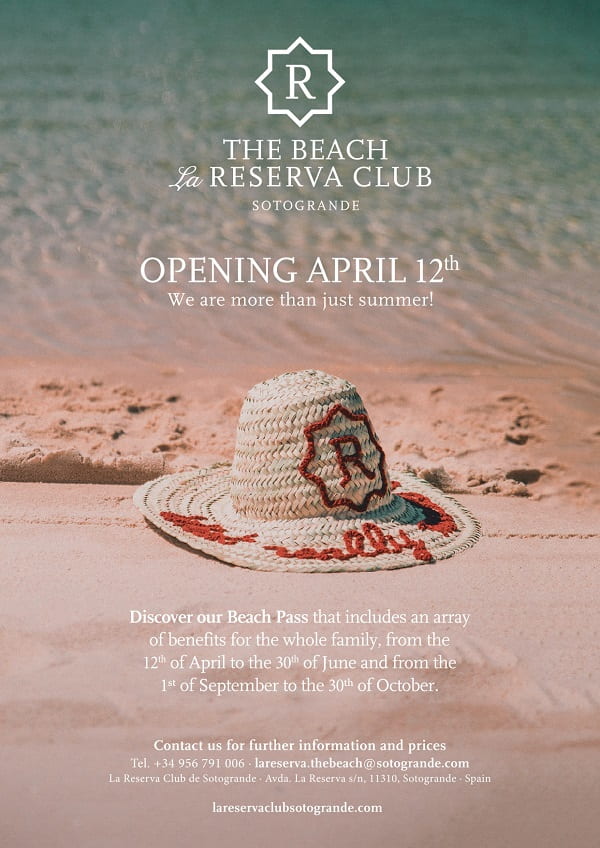 These cookies allow us to count the number of visits and sources of traffic in order to measure and improve the performance of our Platform. They help us to know which pages are the most and least popular, and how many people visit the website. If you do not allow these cookies, we will not know when you visited our Platform.

Behavioural advertising cookies
These cookies are put in place by our advertising partners and can be present throughout the entire platform. Said third parties may use them to create a profile of your interests and show you relevant advertising on other websites. If you do not allow these cookies, you may receive less targeted advertising.