England’s Charley Hull stormed from her sickbed to a share of the overnight lead at the Aramco Team Series after a sizzling opening day in Sotogrande.

Hull attributed dehydration to her withdrawal from the event’s Pro-Am just 24 hours earlier but showed no signs of struggle as she went bogey-free en route to a seven-under 65 in what was her first full 18 round La Reserva Club. 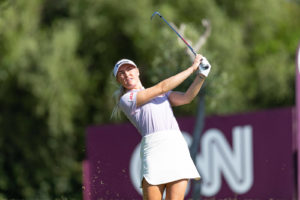 Speaking after her round, Hull said: “It was great fun out there today – such a chilled, relaxed group. It was lovely. I just had so much fun. It was great to play with these two girls.

“Yesterday I had a sickness bug all day. I literally lost 3kgs overnight, which is pretty crazy. I didn’t get to see the back nine of the golf course, but I shot four-under on it blind, so I felt like I played well. I’ll probably get my manager to get me sick more often, shoot low scores!” 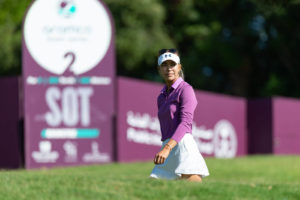 On a blisteringly hot day on the Mediterranean coast, it was co-leader Alison Lee who set the early morning pace, making the most of the calm conditions to card her bogey-free 65, a score that helped propel her team up the leaderboard and just three shots behind Team Wikstrom heading into the tournament’s second day.

“Everything went well today,” said Lee. “I’m hitting my driver good, irons good. I still had a few putts get away from me but overall, I had a pretty good day.

“We are still playing individually, but knowing I have two other girls and an amateur that have my back is really comforting and just makes you feel a lot more confident when you’re out there playing – it doesn’t make you worry too much. I’ve never played in a format like this – I love playing in a team, and this is a lot of fun.”

With the wind picking up throughout the day and temperatures reaching 90 degrees, both Team Wikstrom and Team Lampert were deserving of a place atop the tournament’s Team leaderboard, having both battled to 15-under-par in rounds played in La Reserva’s harsher conditions – with Jessica Karlsson of Sweden even managing an ace on the par-three seventh.

Said Wikstrom: “My team made it pretty easy for me to play because they were making all the putts and our birdies! Luckily, I contributed a little bit for the team, too. We played pretty well – when someone was having a bad hole, someone else was covering it up, and so on. It was good team play.”

On Team Lampert’s performance, South African Nicole Garcia said: “For these events it’s all about dovetailing really well, and we did that. We didn’t make a bogey out there and our amateur can play good golf, so we got lucky there. We did notice that most of the lowest scores came in earlier today, so hopefully being out earlier tomorrow will be good for us.”

In the individual rankings, the chasing pack include Sweden’s Johanna Gustavsson and Stephanie Kyriacou of Australia, who are both on five-under. Maiken Bing Paulsen of Norway and Spain’s Maria Hernandez sit on four-under, alongside Lampert.

Team Hedwell, led by Caroline Hedwall, and Team Strom, captained by Linnea Strom, sit alongside Team Hull and Team Kyriacou, one behind the overnight leaders. Team Creamer sit one further behind, courtesy of a solid two-under par from Creamer herself, also making her Spanish and Aramco Team Series debut.

The world-class international field representing 24 nations featured a strong Spanish contingent with 13 professionals competing in front of home crowds as live ladies golf returning to the pristine fairways in Andalucía.  In the build-up much attention had been given to local star Ana Pelaez, who opened with a 75 on her professional debut, while Maria Hernandez was the best of the Spanish players.

Hernandez commented: “I played very solid and didn’t make any mistakes until the eighth when I missed a very short putt, and then in the ninth I hit a second shot that wasn’t very good. It’s a pity to have finished like that because the sensations were very good.

“It’s a fun format as the atmosphere is so different to a typical week but as always the most important thing is to make birdies. Having tournaments like this from time to time makes the season more enjoyable!”

The Aramco Team Series – Sotogrande continues at La Reserva Club through until Saturday. Free tickets remain available online at www.aramcoteamseries.com/sotogrande, with the tournament adhering to all COVID-19 protocols, as well as local and government guidelines.

A Guide to the exhibition “Se llama Calma”

Artist Sara Calvo has brought together a collection of 14 artworks for an exhibition at our Clubhouse this Autumn. The exhibition is running until...
Read more
Sports

From the 14th to the 17th of October, the popular golf tournament The Estrella Damm N.A. Andalucía Masters returns to the Real Club Valderrama....
Read more
Sports

We’re pleased to announce that our golf, tennis and padel academies are back for a new year. Here’s what the kids have got to...
Read more

This website uses Google Analytics to collect anonymous information such as the number of visitors to the site, and the most popular pages.