Streamed live from the home of Cinco Jotas in Jabugo, Maria Castro, communication director of Cinco Jotas and Jago Chesterton from the PR department of Cinco Jotas gave us a masterclass all about Spanish ham. They explained the difference between the types of ham, told us about the process of selecting a good “jamón”, showed how to cut it and answered questions.

Cinco Jotas has been creating ham and Iberian pork products for over 130 years and to this day has a natural, artisanal production process and is passionate about the welfare of its animals. They allow the pigs to roam totally free range for up to two years and then cure the hams naturally in its cellars in Jabugo, creating some of the world’s very best ham.

In this workshop, they started by explaining the difference between Iberian Ham or Serrano Ham and the other types of cured ham and how they are labelled and separated into categories.

The majority of the hams are made from the white pig, a pig which has been bred to be more productive and offers a high yield, these include Serrano and Parma ham. Even within Iberico ham, 100% Iberian ham represents only 9% of the market. The majority of the meat on the market is mixed, to mature quicker and give a higher yield.

In 2014, a new system of labelling was introduced and enforced, enabling buyers to clearly understand what they were buying. Maria and Jago explained that there are four categories – white, green, red and black.

White and Green are mixed race pigs, not pure Iberian, and are grain fed. The difference between the white and the green is that white animals are raised indoors, whereas the green animals have a larger space to live in inside and are able to spend at least some time outside – so the animal welfare is better in the green category.

The red and black bands denote free range animals, which are left free to roam the oak forests and eat acorns. Both red and black labels are “bellota”, but the red label denotes a cross breed, whereas the black label is 100% Iberian and the jewel in the crown of the Spanish ham producing world.

At Cinco Jotas, the animals live within a natural eco system, the Sierra de Aracena y Picos de Aroche park, which is a UNESCO Biosphere Reserve. It’s an oak forest, with a diverse range of food for the pigs to eat, so they roam to find the best herbs, grasses, roots, as well of course the acorns. At Cinco Jotas they provide 20,000m2 of space per animal, significantly above the required amount, allowing them to roam freely. Maria explained that each animal walks around 14km per day looking for the best food as they are very fussy eaters. They are an indigenous breed, therefore very well adapted to this area. When they are mixed, they are less able to live totally free range as the 100% Iberian pig does.

Jago explained the things to look out for when you’re choosing your ham, to ensure it is 100% Iberico and the different areas of the ham and how to cut it. They showed us the tools you need to correctly cut the ham.

Jago gave us a masterclass in cutting the ham and recommended that when cutting you need to cut very fine slices which are bite sized as you want them to melt in the mouth. 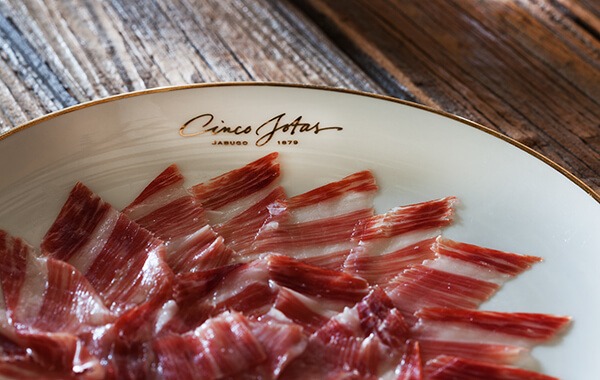 Maria and Jago finished by inviting you to visit the curing cellars in Jabugo once the COVID-19 restrictions are lifted. There you will be able to learn more about the ham making process and of course try some for yourselves. You are also able to buy the incredible products online and our concierge can arrange a personalised experience in Jabugo, or a tasting and pairing of their delicious Iberian pork products with some delicious Osborne sherry here at our La Reserva restaurants.

La Reserva Club is the perfect place to celebrate the holidays, start the New Year right and enjoy your precious free time with those...
Read more
Destination

Sotogrande is a little slice of paradise in the South of Spain, within easy reach of the airports in Malaga, Gibraltar and Jerez, the...
Read more
News

Robert Kmita was appointed Director General of SO/Sotogrande Resort & Spa, which will open for business in 2021 on the Costa del Sol, between...
Read more

This website uses Google Analytics to collect anonymous information such as the number of visitors to the site, and the most popular pages.